James William Carlile was born 5 September 1823 in London, the son of William Carlile and his wife Anne (née Hopkins). He was baptised at St. Thomas’, Hackney, on 19 October 1823.

He joined the firm of Jonas Brook & Brothers, :Meltham:, in 1853 — a company which his father had professional links to — where he remained until the mid-1870s. During this period, he resided at Thick Hollins Hall.

In 1891 he founded the :Carlile Institute: in Meltham.

He retired to Ponsbourne Manor, near Hertford, where he completed writing his History of the Carlile Family.

He died 5 December 1909 in Alcester, Warwickshire.

The History of the Carlile Family (published 1909) contains the following about James William Carlile:

Carlile, James William, the younger son of Carlile, William, of London, was born in London on 5 September, 1823. He was privately educated, and adopted a commercial career. After some years in London, he became, in 1843, a partner in the firm of James Carlile, Sons & Co., Paisley, who carried on business as manufacturers of thread. He remained with them until 1853, when he was invited to join the firm of Jonas Brook & Brothers, thread manufacturers, of Meltham Mills, near Huddersfield, with whom his father had been connected for forty years. He remained in active partnership with Messrs. Brook until 1875. During this time their works were largely extended, owing to the successful carrying out of an important patent.

He was much interested in the Volunteers, and while living near Huddersfield was for six years an officer in the Huddersfield Battalion, from which he retired in 1873, being then Major. He has also been interested in many religious and philanthropic societies, such as the Bible Society, the Church Missionary Society, the Church Army (of which he is a Vice-President), Ridley Hall, Cambridge, and Wycliffe Hall, Oxford, and the Colonial and Continental Church Society, of which last he has recently been elected a Vice-President. In 1891 he founded and endowed the “:Carlile Institute:” at Meltham, and it was enlarged in 1903. The object of this Institute is to provide a place of rest for the factory hands. They have the advantage of two billiard tables, a library and hall for lectures of a scientific or literary nature and concerts. The various rooms are decorated with pithy mottoes selected by the Founder, and the hall is decorated with oil pictures, kit-kat size, of the Prime Ministers during the life of the Founder. Mr. J.W. Carlile has collected many good pictures, among them a Holbein (portrait of Duke of Somerset), Leighton, Colin Hunter, and Marcus Stone (2). In 1886 his portrait and that of his (first) wife were painted by W.W. Ouless, R.A. These latter pictures and many others are now at Gayhurst (Carlile, William Walter). In 1906 he presented his “The Last Load,” by John Linnell, senior (1792— 1882), canvas 2 ft. 11 in. by 4ft 9½ in., to the Tate Gallery, where it is now hanging in Gallery III, No. 2060.

In politics he is a Conservative, and he is a member of the Junior Carlton Club.

In 1867 he purchased the Temple Grafton estate near Stratford-on-Avon, and rebuilt the church, adding schools and cottages. He presented this estate to his elder daughter, who has the gift of the living (Gregg, Alice Woodhams). In 1875 he purchased the Ponsbourne Park estate near Hertford, and lived there until 1906, when he sold the estate to his nephew (Carlile, Edward Hildred). In 1882 he purchased the Gayhurst estate, Bucks, and presented it to his son, who has the gift of the living (Carlile, William Walter).

Mr. J.W. Carlile now resides at a house called Ponsbourne Manor, which he built some years ago on the estate, intending it to be a dower house.

He was married on 1 July, 1850, by the Rev. Dr. Smith, of the Free Scotch Church, to Mary Woodhams (born in Glasgow), daughter of Walter Woodhams Whiteman, of Glen-Garr, Argyleshire, by his wife Agnes Smilie Hart, of Co. Renfrew. This Mrs. J.W. Carlile died on 10 July, 1892, at Ashendene, Ponsbourne, and was buried in Bayford Churchyard, Herts. There were three children of the marriage, all of whom survive ; see Carlile, William Walter ; Gregg, Alice Woodhams, and Orme-Webb, Agnes Mary. He married secondly on 4 December, 1895, at Little Berkhampstead Church, Herts, Elizabeth Walker, widow of Joseph Crossley, of Halifax. She was born at Carlisle in 1831, and died on 14 July, 1903, at Ponsbourne Park, and was buried in Bayford Churchyard.

Since giving up business he has entered with great interest into archaeological studies, beginning with the estate of Temple Grafton, Warwickshire. He secured the able assistance of Mr. W. F. Noble, of the Record Office, to search the manuscripts, who found a large amount of interesting matter, giving almost a consecutive history of the two Graftons. Mr. J.W. Carlile has also collected the history of Ponsbourne Park and the manor of Newgate Street, Herts. He possesses a picture of the two houses, which were pulled down by Mr. Sullivan about 1761. His researches were published in 190S under the title Archceological Studies on the Two Manors of Ponsbourne and Newgate Street in the Parish of Bishop’s Hatfield, Co. Herts, 8½ by 5½, 17 pages. He supplied Thomas Wright with the history of Gayhurst for his interesting work The Town of Cowper (London, Sampson Low & Co., 1886). He also wrote in blank verse Everard Digby and the Gunpowder Plot. In April, 1907, he printed for private circulation an autobiography entitled Notes of a Journal (8½ by 5½ in., 56 pages).

His armorial bearings, obtained from the Lyon King of Arms (Scotland), are as follows :— Or, a cross flory gules, charged with a crescent of the field, on a chief of the second, a saltire of the first. Mantling, gules doubled argent. Crest, on a wreath of the liveries, two dragons’ heads addorsee, vert. Motto, “Humilitate.” He is now (1908) the oldest of the Paisley Carliles. 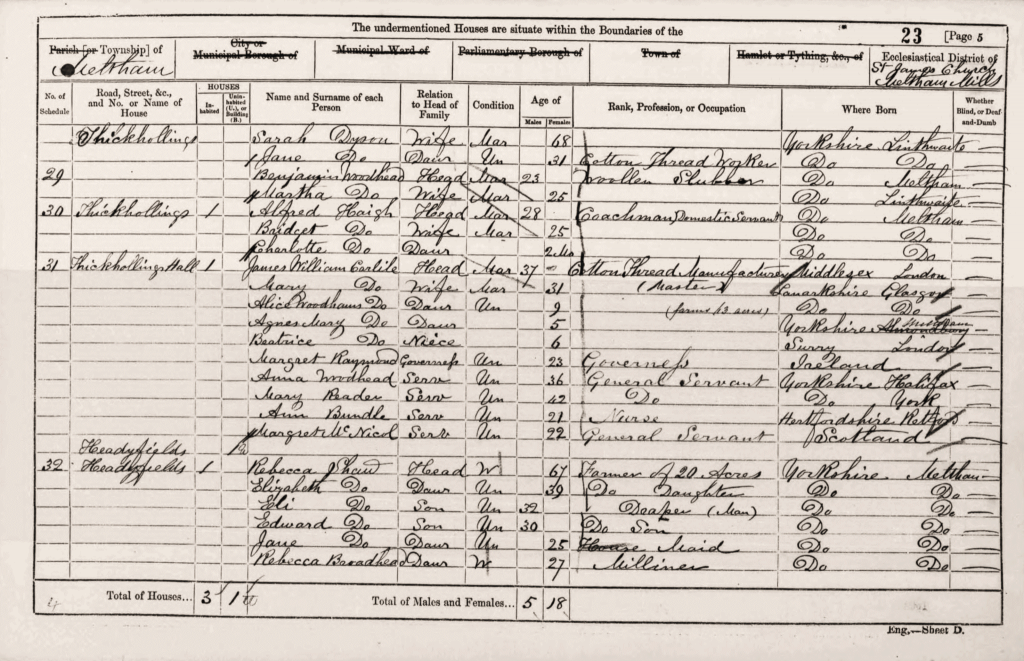