FORTY YEARS ON — AND THE FIRST PASSENGER TRAIN ARRIVES

The branch line to Huddersfield Newtown, which was opened by the Midland Railway in 1910 as part of a scheme to win from competing companies the Huddersfield-London traffic, has had to wait until today for its first passenger tram. The passengers, moreover, were not those that the directors would have hoped for ; they were, in a way, railway archaeologists, exploring several “dead” passenger lines in this district of the Pennines. 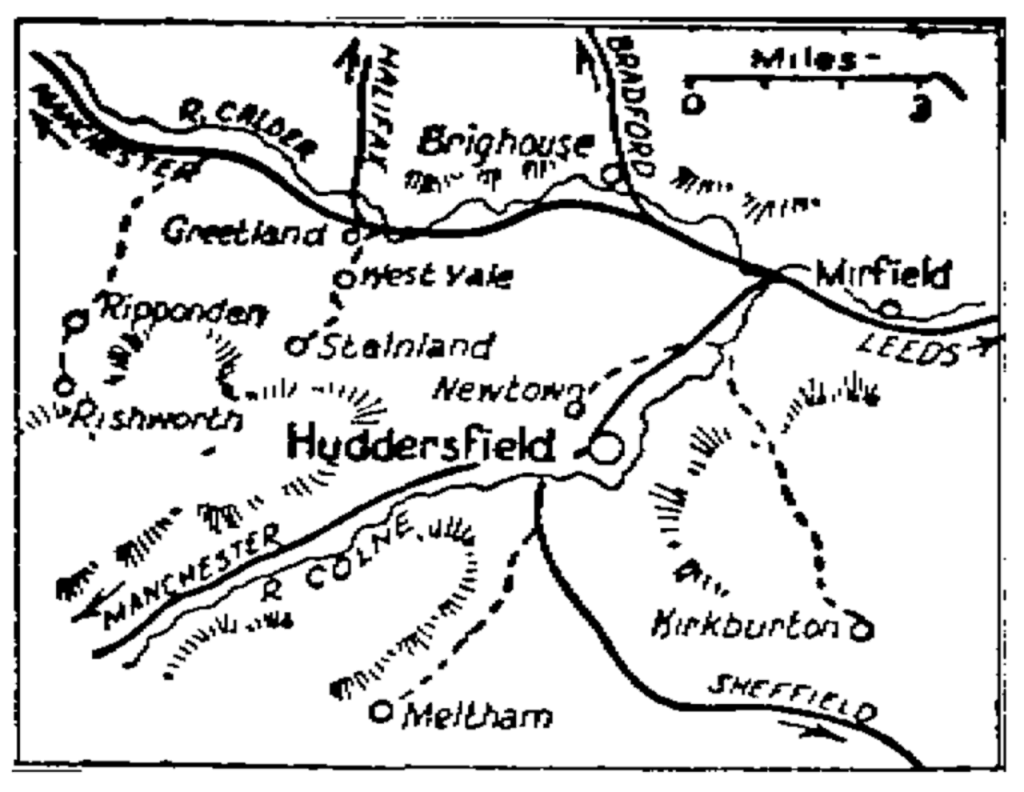 Similar historical pilgrimages over disused loops and branches have already been arranged from London and Birmingham and in Scotland. In America, too, “railfan excursions” are no new idea. But today’s expedition was the first in the North of England. It was the result of six months’ co-operation between the Manchester Locomotive Society, the Stephenson Locomotive Society, and British Railways. The engine, three coaches, and the crew were provided by British Railways, the societies provided some hundred and forty passengers. In effect the three bodies melted into one, for the engine driver belonged to the Stephenson Society, and many members of the societies were railway servants.

Nothing — not Stonehenge nor Pompeii nor Ur of the Chaldees — can look more utterly defeated by time than a derelict railway station, with grass and willow-herb pushing through the flagstones, booking offices in which birds have nested, gorse bushes flowering between rusty rails, and rotting sleepers lying about. Yet each of the stations we visited — Meltham, Kirkburton, Stainland, Ripponden, and Rishworth — was served by at least eleven passenger trains a day until 1929 to 1930. The Meltham line was closed as recently as 1949. Huddersfield Newtown never had a station ; the terminus from which travellers were to have been conveyed to St. Pancras was never built, and Huddersfield people still arrive in London at King’s Cross or Euston.

To increase our sense of antiquity the organisers of the pilgrimage had very properly harnessed to our train a tank engine built fifty years ago. She was, one was told, “one of the 2-4-2 side-tank engines of the one-time Lancashire and Yorkshire Railway,” designed by Sir John Aspinall and of the same type as the first engine turned out at the new Horwich works in 1889. To one not steeped in railway lore she had a still more venerable air, although she is still in use, the funnel and dome on the long slender boiler looked lather like a top hat and a tall bowler as they might have been worn at the Great Exhibition.

It was difficult to get used to the idea that the country we were travelling through was not as desolate and derelict as the stations we stopped at. It did not seem fitting that we should see through the windows the same scenery as from the most up-to-date express — the sewage works, the fields and sheep, the lonely textile mills, the old bedsteads in the allotments, and the telegraph wires dipping and rising. It was surprising to find people still living in Ripponden.

We seem to be living in the past and the present simultaneously. But in fact we were not the pioneers we were inclined to think ourselves when we heard branches brushing or beating against the sides of our coaches, or waited for the guard to open the level-crossing gates. Goods trains still use all the lines regularly, and our own, nosing its way through the overgrown cuttings, was in no danger of having the tracks collapse under it.

My fellow-travellers were both experts and enthusiasts. It is not entirely a metaphor to call the expedition a pilgrimage (a merry one, it is true, like Chaucer’s), the pilgrims felt towards the railways something of the disinterested devotion of hierophants (or “expounders of sacred mysteries”). Their conversation was sprinkled liberally with technical terms, and when the talk did stray from railways it did not get farther than, for instance, the gauge of tramlines in various cities.

Their knowledge was useful towards the end of the six-hour run, for the tram was about an hour late, and much valuable advice could be given about connections home (some of the passengers had come from as far as Swindon and Sevenoaks, although most were from the North). One railway official shamelessly consulted a bus time-table, and so gave one more tiny stir to the poison that had already killed off those decaying lines from whose post-mortem he was returning.