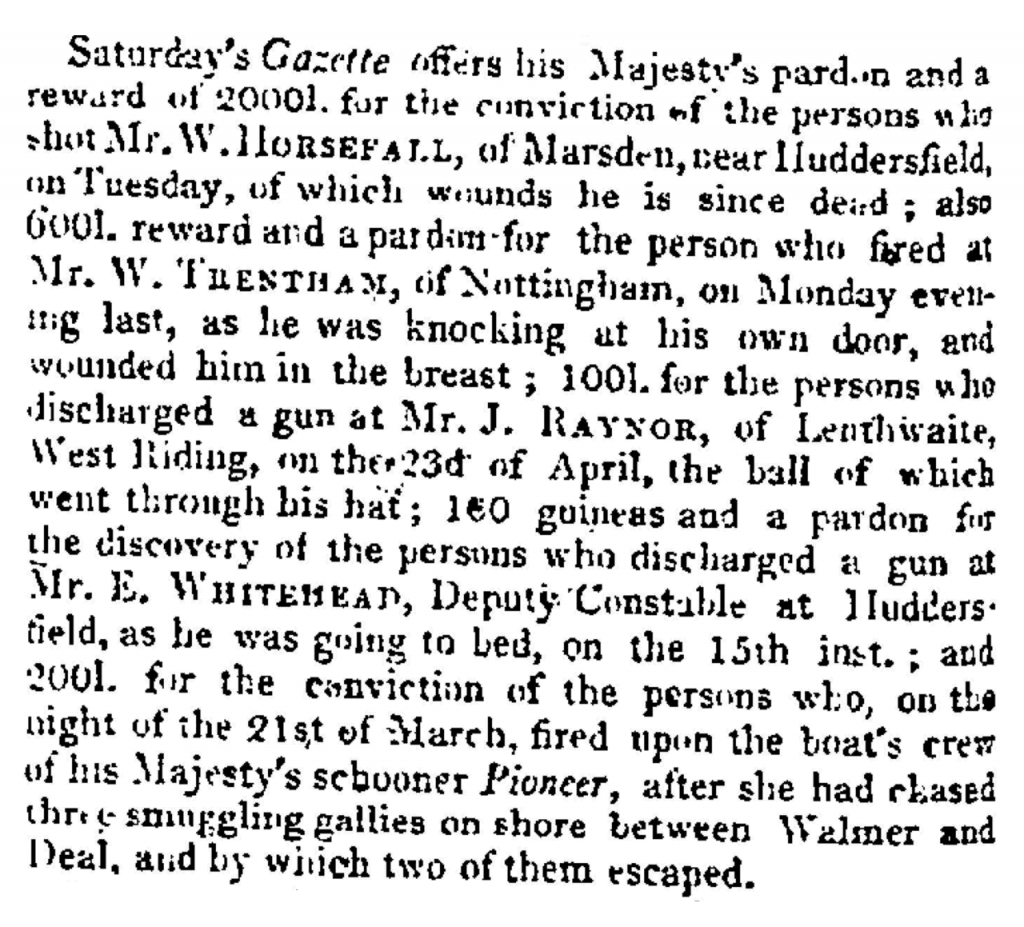 DISTURBANCES IN THE COUNTY

Letters from the country state that, though the great tumults have subsided, shocking outrages are committed by small parties of depredators and assassins.

Mr. Horsfall, a principal manufacturer, was shot in the neighbourhood of Huddersfield, by four men, who fired at him on Tuesday evening last, from behind a wall, as he was retiring from Manchester market.

Mr. Cartwright, who so bravely defended his property, in Yorkshire, has been fired at on three distinct occasions, but without doing him the slightest injury.

Every thing was tranquil at Manchester on the 29th.

On Tuesday evening last, about half past six o’clock, as Mr. William Horsfall, a very extensive Woollen Manufacturer, at Marsden, about seven miles from Huddersfield, was returning from the market at that place, he was assassinated on the public road, on Crosland Moor.

The circumstances, as states to us by an eyewitness of this most barbarous Murder are these :— Mr. Horsfall and a Manufacturer, of the name Eastwood, had left Huddersfield together, and at a short distance before they came to the fate spot, Mr. Eastwood stopped to water his horse, while Mr. Horsfall rode leisurely along the road ; when he had come within about 500 yards of the Warren Inn, a distance of about a mile and a half from Huddersfield, on the Manchester road, four men, each armed with a horse pistol, who had just before stepped out of a small plantation, placed the barrels of their pistols in apertures in the wall, apparently prepared for that purpose ; the muzzle of two of these pieces Mr. Horsfall distinctly saw, but before he had time to extricate himself from his perilous situation, they all four fired, and inflicted four wounds in the left side of their victim, who instantly fell from his horse, and the blood flowed from the wounds in torrents. A number of passengers both horse and foot rushed almost instantly to the spot, and, after disentangling his foot from the stirrup, he was some difficulty got to the Inn.

The Murderers, after they had perpetrated the sanguinary deed, walked to the distance of some yards, and soon after briskening their speed, they ran towards Dungeon Wood, and entirely escaped undiscovered, no pursuit or search having been made after them, till the arrival of a troop of the Queen’s Bays, about three quarters of an hour afterwards. One of the Assassins is described to us as about six feet high, another as a low portly man, and the two others as about five feet six or seven inches high, and rather slender ; they all wore dark coarse woollen coats, and appeared to be working men.

From a professional Gentleman, who was called in to visit Mr. Horsfall, we learn, that three of the wounds, out of the four, were slight, and unattended with danger, but the fourth made by a musket ball, which entering the abdomen on the left side had taken a downward direction, and lodged in the back park of the right thigh, from which it was extracted on Wednesday, along with a pistol ball, at which time, some faint hopes were entertained of the patient’s recovery ; but on Thursday morning, about five o’clock, a profuse bleeding came on, accompanied by mortification, by which the thigh was swollen to an enormous size, and between eight and nine o’clock that morning, he expired, in perfect possession of his faculties.

Mr. Horsfall had a very large Woollen Manufactory at Marsden, wherein about 400 work people were employed ; and in part of his premises there are Shearing Machines, which have been erected about seven years, and have attained considerable perfection ; this circumstance, with the additional one of his unremitting activity in detecting, and bringing to justice the persons engaged in the attack at Rawfolds, and other Mills, had rendered him obnoxious in a high degree to the machine destroyers, who knowing his premises were too well defended to justify an attack on his property, committed a crime against his person, that will embitter every future day of their existence, and, that will, in all probability through the retributive justice of that Being, from who no secrets are hid, bring the blood-stained perpetrators of this worst of crimes, to an ignominious end.

A reward of £2000 will, we understand, be offered immediately to any person who will give such information as will lead to the conviction of any one or more of the four men concerned in the murder of Mr. Horsfall.